When travelling through Mongolia in 2009, some friends of mine asked me to take their car home. They had driven the old Ford Escort 10,000 miles from London to Ulaan Baatar (Mongolia's capital) and had been told by the authorities that they must take it out of the country or face stiff penalties. On a whim, I agreed to take it and set off a couple of days later. 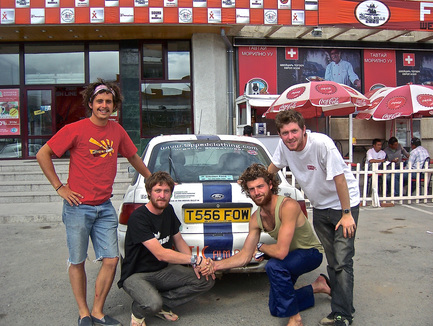 Receiving the keys from the previous owners
Here's a short article I wrote about the journey:

As the sun lolls over the rolling mountains of knotted birch forest, a lopsided car, sitting on a jack and missing a wheel, is being swallowed by the encroaching dark. The temperature is dropping.

Two of us huddle over a pithy road-side fire in the heart of Siberia. A pair of headlights snake up the hillside and pull over. Out of the rusting soviet minivan leaps a Russian, with strong Mongol features, followed by two beaming Englishmen, our friends. Incredibly, they have found the necessary spare part for our ailing car, ‘Butch Cassidy’. We quickly exhaust our Russian vocabulary thanking him. Soon we’re on our way. England feels, and is, very far.
Dubbed “the rally you start with a beard”, the England Rally is an unofficial and little-known return journey from the Mongol Rally. New in the last few years, only a handful of cars have completed it. The rally takes you home to England, passing several thousand miles through Russia, and is a good way to get cars older than ten years out of the country. This became necessary when Mongolia’s government finally snapped after years of shoddy cars traipsing over their border and abruptly dying a spluttery death. In September, I acquired just such a car in Mongolia and embarked on the Rally.

Butch is a tired 1998 1.4L White Ford Escort with a blue stripe down the middle. He has just driven a dusty 10,000 miles from London and it shows is both his appearance and the unusual sounds he makes. He has no back seats. 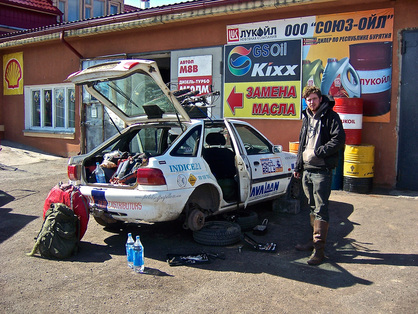 Broken down in Siberia
Armed with three travel companions and a seven day Russian transit visa, I soon reach the border and cross into Siberia. We fill up on laughably cheap petrol, at 36p per litre, and set up camp in a forest. Attracted by the heat of our fire, an emaciated kitten, obviously motherless, stumbles out of the darkness. It spends the night warming my feet at the bottom of my sleeping bag. In the morning, with regret, I leave it mewing at the roadside. This is Siberia and winter is coming; it will soon be dead.

Some roads are abominable and we often drive in second gear for long periods. Each day, towns with vaguely familiar names roll by: Irkutsk, Omsk, Novosibirsk, Chelyabinsk. Everywhere are signs of Stalin’s industrialisation in the form of hulking factories with smoking chimneys.
The fuel line leaks badly and we patch it up with rubber tubing and duct tape, a masterclass in bodge-jobbery. One wheel is emitting a loud grinding sound that makes us cringe. We know it will not hold out for long; it is the sound of impending delay and a cause for concern as we have six days to drive 4,000 miles to the Latvian border. Failure in this will result in heavy fines.

The right wishbone breaks early on, badly affecting the steering and causing the front wheels to work against each other. We burn through roughly a tyre a day for the rest of the journey, each going completely bald and blowing out dramatically.

A day passes. So does forest, road and a vast statue of Lenin’s head; the largest in the world. Finally, in the mountains, it happens. The car jolts violently towards the road-side and the sound in the wheel becomes a horrible grating. We narrowly avoid rolling down a fatally steep slope. The wheel bearing is completely shot so, angrily clutching short straws, two set off down the road with some food and a torch to look for help. I am one of the lucky ones remaining; I light a fire, make coffee and nestle in. 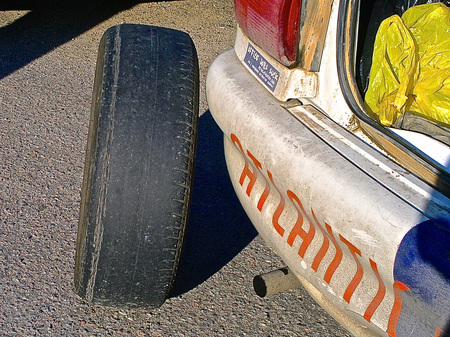 A dangerously worn tyre; one of many
Once the helpful Russian man has rattled off, we fix the wheel with our assortment of mismatched tools and rush past the enormity of Lake Baikal which holds 20 per cent of the world’s fresh water. Most men we encounter are either drunk or about to be, even those driving. Vodka has a devastating presence here. However, the people are welcoming without exception; sometimes feeding us Russia’s renowned beetroot soup, borscht.
Much of the route we follow is being rebuilt. We are tossed onto bumpy nearby tracks built by the unhappy inhabitants of the Soviet Union’s gulag labour camps. The history makes for grim reading and following these tracks makes for grim driving, especially as the two passengers in the back have no seats and a dismantled bicycle for company.

The most common decision a driver faces is whether to avoid the pothole or the large rocks littering the road; rarely are both possible. Visibility is sometimes reduced to a painful few meters, ahead of which large lorries jolt along, kicking up dust and disgorging thick exhaust fumes.
Our only map is entirely in Russian lettering and dated by over ten years. One day we misread it and, without warning, hit the Kazakhstan border. Taking an off-road detour around the border, the fuel line goes again. It is midnight and we see a broad trail of petrol running into the dark behind the car. Once repaired, we move the car a few meters forward and light the end of the trail. Thrillingly, a line of fire races away into the night, as far as our bleary eyes can see, weaving between the potholes and boulders.

We avoid police. When passing them we stare nonchalantly forward, going respectably slowly. Only once is money extorted out of us and, in a surreal conversation (involving many numbers etched on our dirty car), we manage to negotiate this from £55 to 50p.

As we forge further West, the faces we see shift from Asiatic to European and the towns become less desolate. Finally, the Latvian border appears and we relax as we cross without hassle. Europe means ease: good roads and plenty of spare parts. In a few breezy days, we roll off a ferry in Dover and top up for the last time. Petrol costs 110p per litre; we’re definitely home. 6,500 miles separate us and the start line.