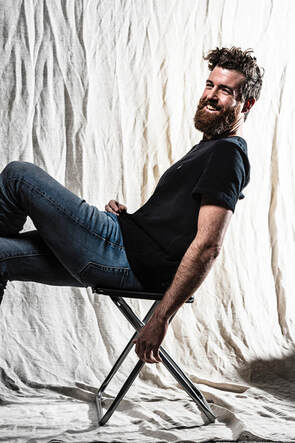 © Nick Holt
Charlie Walker is a British adventurer, writer and public speaker. He specialises in long distance, human-powered expeditions and has travelled by bicycle, foot, horse and dugout canoe. He is a Fellow of the Royal Geographical Society and a three-time recipient of the Transglobe Expedition Trust 'Mad but Marvellous' grant. His work has featured in a range of publications including The Sunday Times, The Daily Telegraph, The Sun, Wanderlust, Geographical, Travel Africa and Sidetracked magazine as well as BBC Radio 4 and the World Service. He has written two books about his experiences.

Charlie’s longest expedition was a 43,000-mile (70,000 km) bicycle journey reaching the furthest cape in each of Europe, Asia and Africa before returning home. On this journey he traversed 60 countries, encountering extremes of weather, remoteness and physical exhaustion during the four and a half years he was away.

In 2022 Charlie spent two months trekking along the surface of frozen rivers and over Arctic sea ice in northeast Russia in order to visit remote-living groups of indigenous Siberians. The journey involved camping in temperatures as low as -50ºC and began just before Putin launched his war in Ukraine. After the invasion began - with an atmosphere of heightened political tension - the expedition culminated in a four-week stint in prison on spurious charges of photographing sensitive military sites.

In 2017, Charlie completed a world-first 5,200-mile triathlon along the perceived Europe Asia border. This expedition spanned from the midwinter snowfields of the Russian Arctic to the Bosphorus in Istanbul and was an investigation into the concept of man-made borders.

​Charlie's 2019 traverse of Papua New Guinea by foot and paddle took him to some of the most remote communities he's encountered living among some of the world's least accessible jungle.

In 2014 Charlie descended the Lulua, a little-known tributary of the Congo River, in a leaky dugout canoe. This journey into remote and effectively uncharted territory of DRC was beset by rapids, waterfalls, hippos, crocodiles and finally, shortly after leaving the river, violent bouts of malaria and typhoid fever.

In 2012 Charlie walked 1,000 miles solo across the Gobi desert from China to Mongolia. This feat involved walking over six marathons a week for six weeks whilst carrying enough food and water to survive. He then trekked 600 miles across Central and Northern Mongolia in the company of only a semi-feral pony and a stray dog he found in the forest.